During my Sitecore from the Command Line presentation at the Sitecore User Group – New England, I had briefly showcased a custom PowerShell function that expands Sitecore tokens in fields of a supplied item, and how I had saved this function into the Functions section of the Script Library — /sitecore/system/Modules/PowerShell/Script Library/Functions — of the Sitecore PowerShell Extensions module. This blog post captures what I had shown.

This is the custom function I had shown — albeit I changed its name to adhere to the naming convention in PowerShell for functions and commands (Verb-SingularNoun):

Once tokens have been expanded, a confirmation message is sent to the Results window.

I saved the above function into the Script Library of my copy of the Sitecore PowerShell Extensions module: 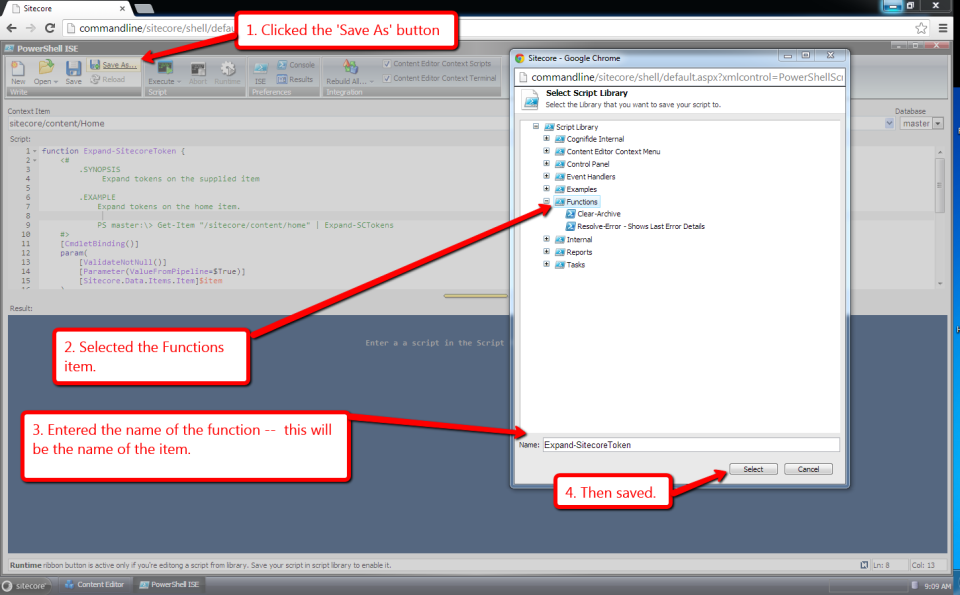 An item was created in the Script Library to house the function:

Let’s try it out.

In the Integrated Scripting Environment of the Sitecore PowerShell Extensions module, I typed in the following code:

You can consider the Execute-Script “master:/system/Modules/PowerShell/Script Library/Functions/Expand-SitecoreToken” line of code to be comparable to a javascript “script” tag — it will execute the script thus defining the function so we can execute it.

I then ran that code above: 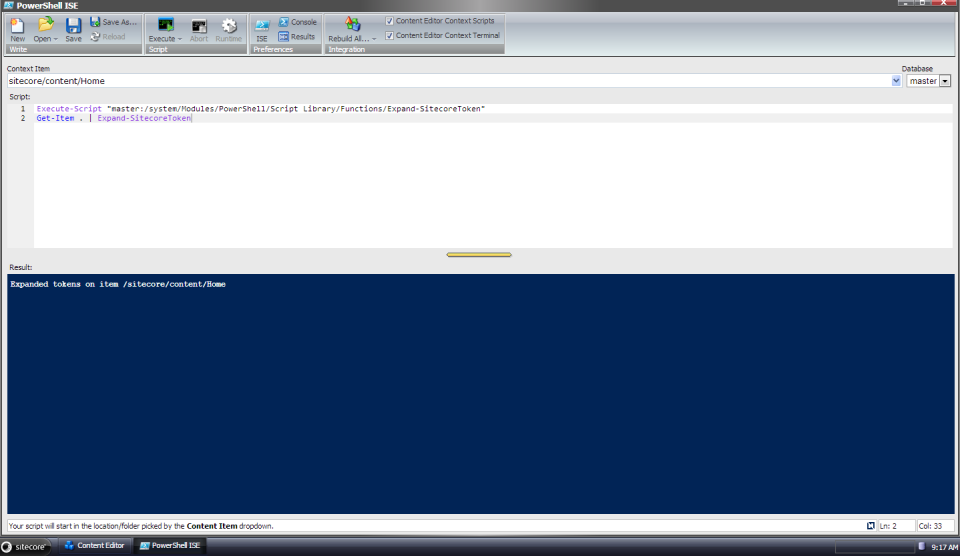 Once the script finished running, I went back over to the Content Editor, and saw that tokens were expanded on the Home item:

You might be thinking “Mike, I really don’t want to be bothered with expanding these tokens, and would rather have our Content Editors/Authors do it. is there something we can set up to make that happen?”

The script is then saved in a new item created under Content Editor Context Menu item in the Script Library:

Let’s see it in action.

I chose the following page at random to expand tokens:

I right-clicked on the item to launch it’s context menu, opened up scripts, and saw a new “Expand Tokens” option:

I clicked it, and was given a dialog with a status bar:

I refreshed the item, and saw that all tokens were expanded: 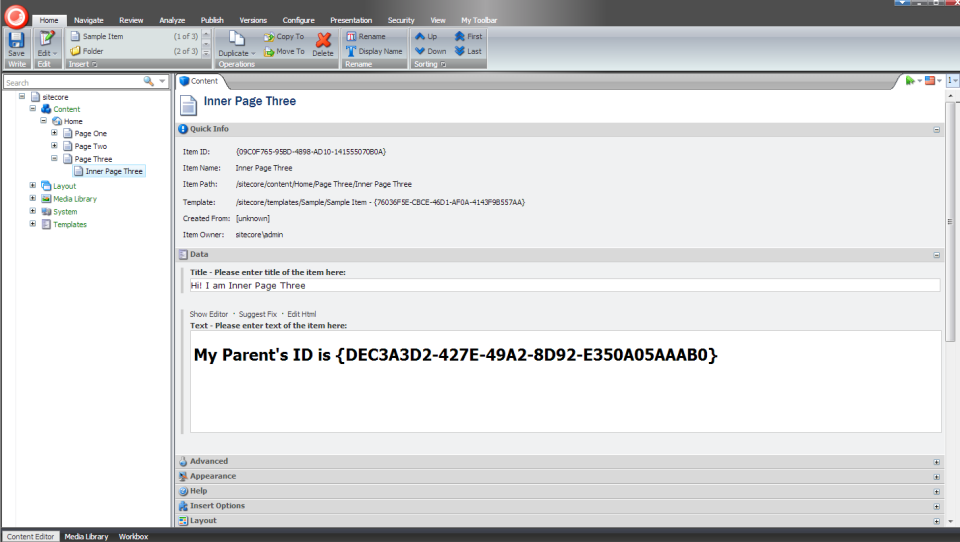 If you have any thoughts or questions on this, please leave a comment.

Until next time, have a scriptabulous day!

During my Sitecore from the Command Line presentation at the Sitecore User Group – New England, I had shown attendees how they could go about adding a custom command into the Sitecore PowerShell Extensions module.

The command above subclasses Cognifide.PowerShell.PowerShellIntegrations.Commandlets.BaseCommand — the base class for most (if not all) commands in Sitecore PowerShell Extensions.

An item is passed to the command via a parameter, and is magically set on the Item property of the command class instance.

The ValueFromPipeline parameter being set to “true” on the Item property’s Parameter attribute will allow for chaining of this command with others so that items can be fed into it via a pipe bridging the commands together in PowerShell.

Once tokens have been expanded on the item — or not in the event an exception is encountered — the item is written to the Results window via the WriteItem method which is defined in the BaseCommand class.

I then had to wire up the custom command via a patch configuration file:

Let’s take this custom command for a spin.

I created a bunch of test items, and set tokens in their fields. I then selected the following page at random for testing: 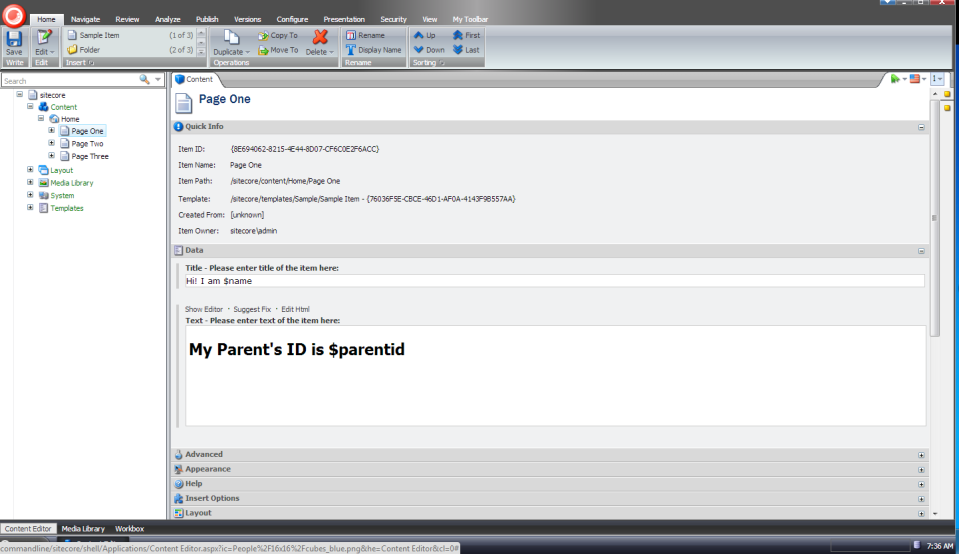 I opened up the Integrated Scripting Environment of Sitecore PowerShell Extensions, typed in the following PowerShell code, and executed by pressing Ctrl-E: 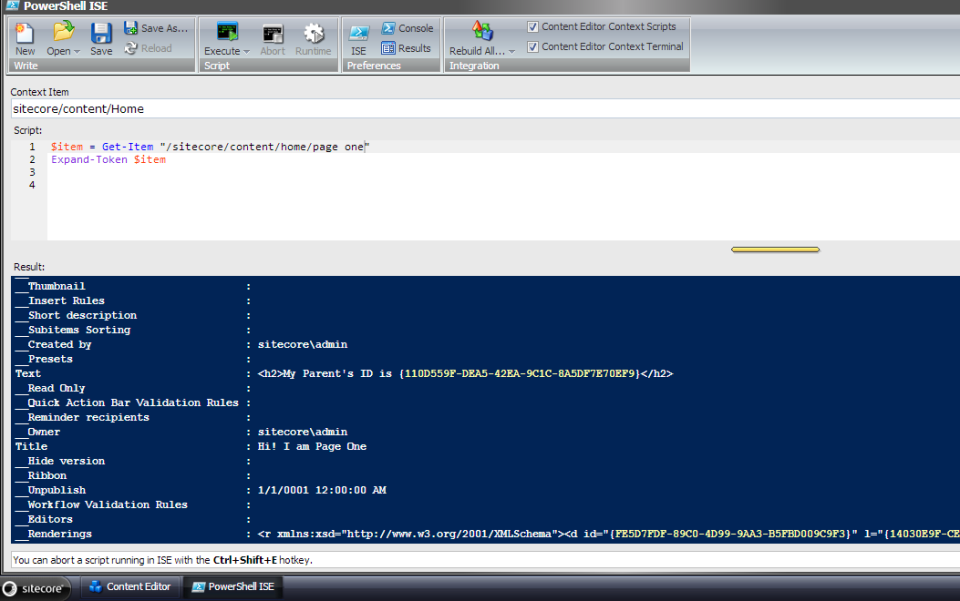 As you can see tokens were expanded on the Page One item: 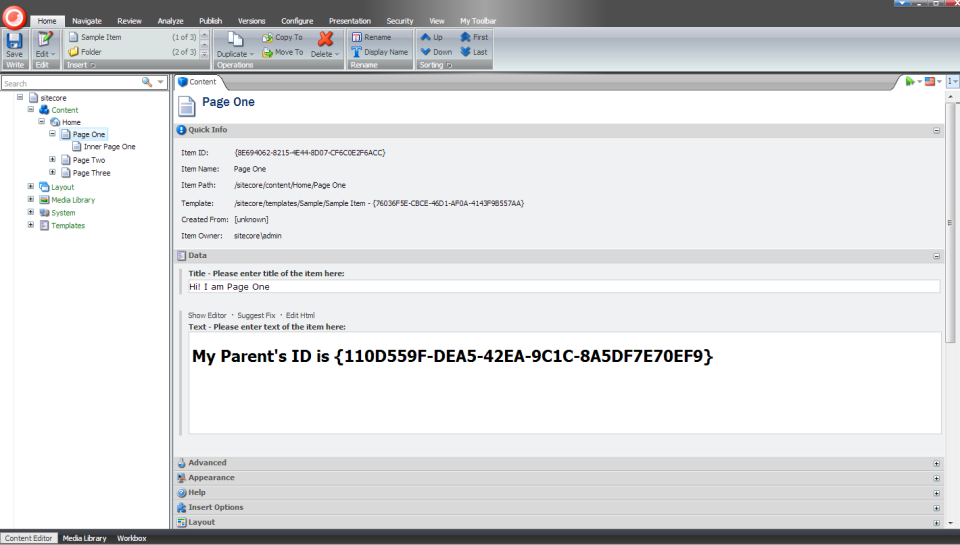 How about expanding tokens on all descendants of the Home item? Let’s see an example of how we can do that.

I chose the following content item — a grandchild of the Home item — for testing:

I switched back over to the Integrated Scripting Environment, wrote the following code for testing — the Get-ChildItem command with the -r parameter (this means do this recursively) will grab all descendants of the Home item, and pipe each item in the result set into the Expand-Token command — and clicked the Execute button:

I then went back to the grandchild item of the Home page in the content tree, and saw that tokens were expanded in its fields: 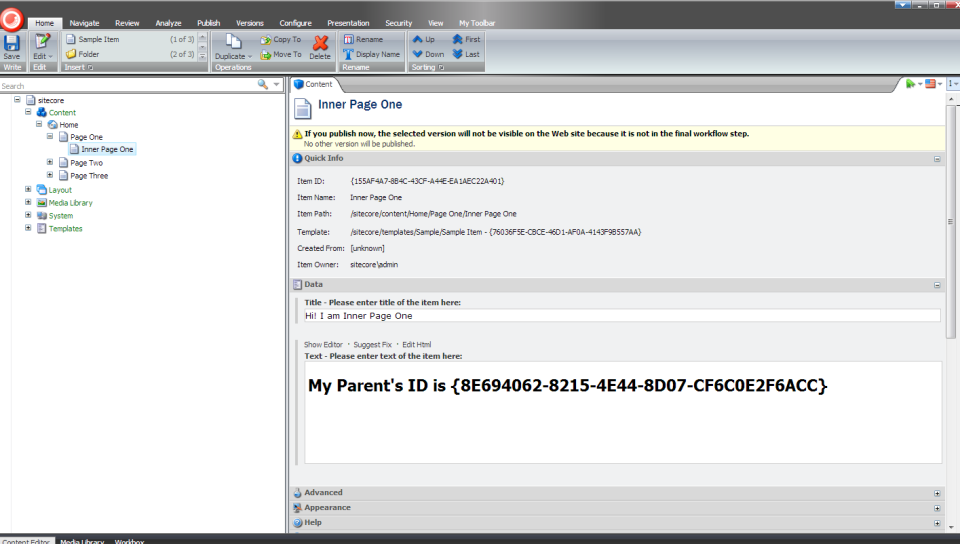 If you have any thoughts or comments on this, or ideas for new commands in Sitecore PowerShell Extensions, please share in a comment.

Until next time, have a scriptolicious day!